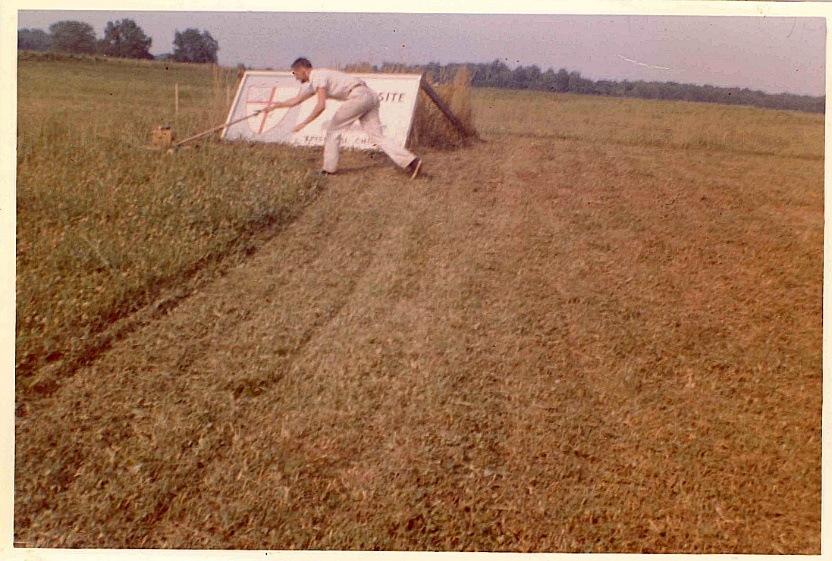 To prepare for the groundbreaking ceremony, Rev. Bill Opel, then priest-in-charge and later our first Rector, mowed the existing meadow to show the outline of the new church.

For our 50th anniversary celebration in 2011, a History Committee was formed to preserve the images and events of our past.  Here is a sampling of how the community we share today has grown over the years.

St. Thomas’ Episcopal Church was born of the foresight of the Potomac Area Strategy Committee of the Diocese of Virginia. The Committee, with the consent of rectors of the neighboring parishes, agreed that a new congregation be formed, and the Diocese of Virginia purchased the present site of 5 acres for $17,500 in January 1960.

The Rev. William A. Opel was appointed priest in charge, and in summer 1961 a meeting was called of Episcopalians in the immediate area to discuss the organization of a new church to serve the growing suburban population not located near established parishes.  Groundbreaking for the new church, which still did not have a name, was held on Sunday, July 30, 1961. A view of the sanctuary not long after it was completed.

Construction began thereafter on a rectory and church structure using the modular, A-frame “Church of the Sixties” design developed by the Diocese of Virginia for new congregations. Until the new church was available, services would be held at Andrew Chapel Methodist Church, and the first service of the new St. Thomas’ Episcopal Church was held there at 4:00 p.m., on September 10, 1961.

The first service in the new sanctuary, still under construction, was held on Christmas Eve, 1961.  Plywood occupied the window spaces, kerosene heaters provided warmth, and light was by candles.  The finished church was dedicated by the Rt. Rev. Samuel B. Chilton, Suffragan Bishop of Virginia, in a service in which other Episcopal leaders took part on Sunday, September 9, 1962.

The current sanctuary is the only remaining part of that original structure, which also included a wing housing two or three classrooms, a low-ceilinged meeting hall, and a kitchen area. 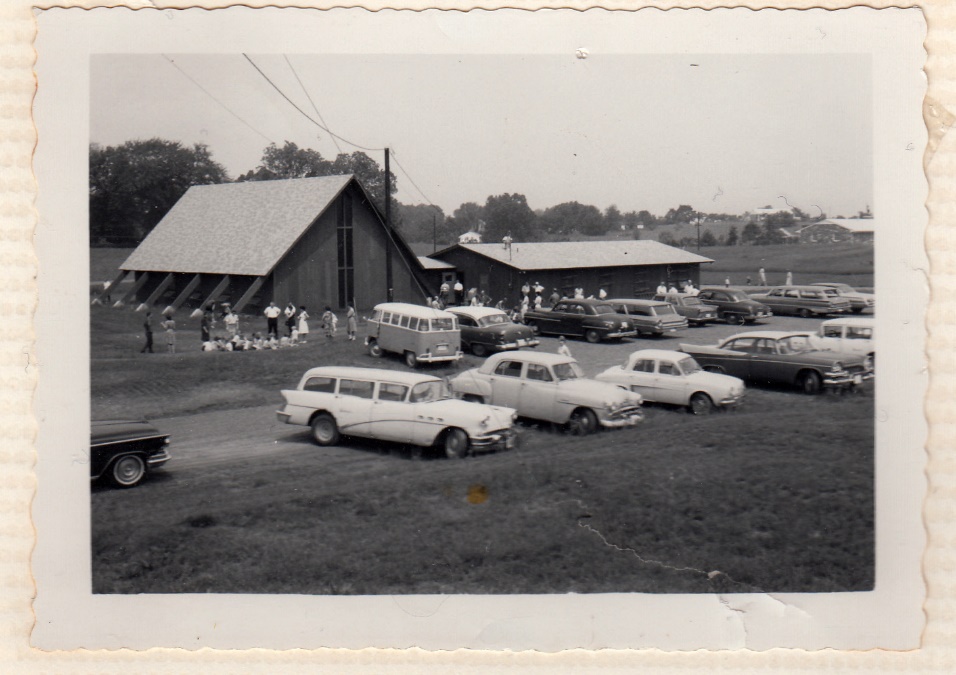 In 1965, a sacristy, seven new classrooms, office space and a combination choir room and library were added, and the parish hall and kitchen were modified to give more working space.

In 1966, St. Thomas’ achieved parish status and thereby became a separate congregation. In this same year, the Rev. Opel exchanged parishes with the Rev. Alex Methven in London.  The Rev. Methven was later called and served again as Rector of the parish, from 1968 to 1969.

In August 1969, the parish called the Rev. Robert W. Dickey to St. Thomas’ from the Diocese of Delaware, and he served as rector until September 1986.  In his 17 years here, the parish flourished, drawing on the expanding housing development and population growth west of Tyson’s Corner and supporting numerous programs that enriched both families within the parish and the broader community.

In 1988 the parish called the Rev. John W. Morris. In his 17-year tenure as rector, St. Thomas’ lay leadership expanded and took on strong independent roles in music, outreach, and education. Substantial capital programs were also undertaken in the mid-90’s to expand and renovate St. Thomas’ physical facility.

The renovation included building a narthex to welcome visitors and parishioners, creating a workable kitchen and spacious parish hall for parish and community events, and providing an education wing with the capacity to stimulate and engage teachers and students in lively activity. At the end of this renovation period, a newly acquired church organ was rebuilt and installed to enrich the music program that has always been central to the life of this parish. 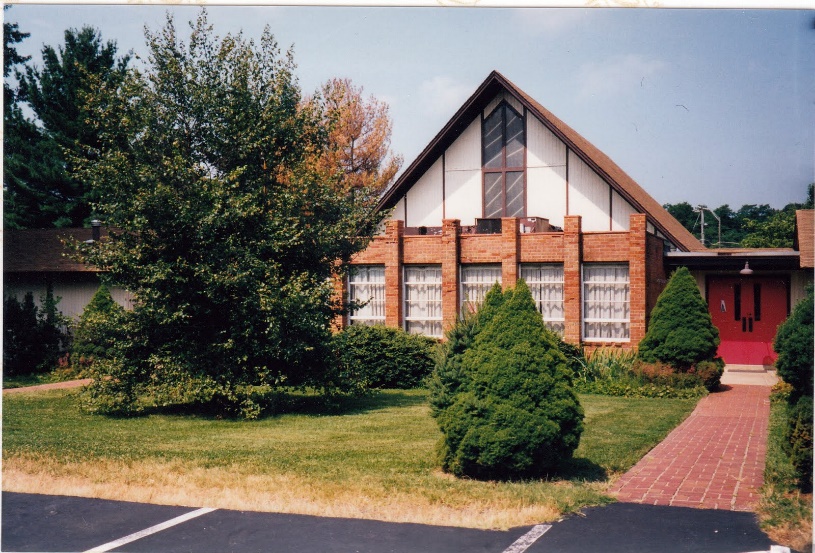 The church entrance, before the late 1990’s construction and renovations.

In July 2007, the parish called the Rev. Dr. Stephen Edmondson as Rector.  One of the highlights of his nine-year tenure was St. Thomas’ 50th Anniversary celebration in the fall of 2011, which included a months-long series of events during which we welcomed back clergy and friends from throughout our history, including our founding Rector, Rev. Bill Opel.  In 2014-15, Rev. Edmondson oversaw a large scale renovation of the sanctuary, which included upgrading the wall finishes and floor tiles, and stripping and re-staining the pews and window frames.

Throughout our history we have been blessed with talented parishioners whose creations surround us in the sanctuary today.  In the early days, parishioner Brad deWolf designed and built the altar rail, pulpit, lectern, and baptismal font.  He also built the two tall stained glass windows behind the altar, and the large, beautiful cross which hangs above the altar. 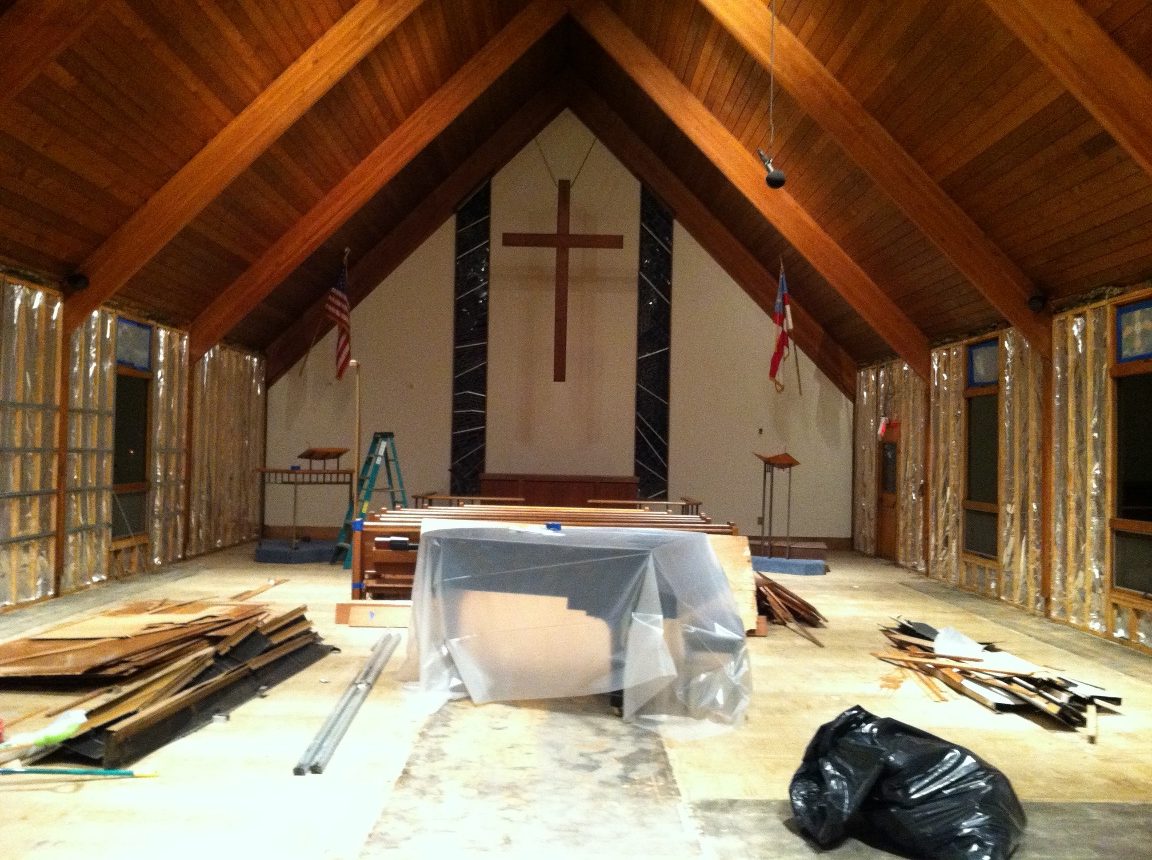 The sanctuary during the 2015 renovations.

Parishioner Chris Butler designed and built the six stained glass windows on the side walls. During the 2015 renovations, a large number of parishioners, led by Jeff Crigler and Chuck Grimes, did critical work.  As we worship in the sanctuary, we are surrounded by the gifts and contributions from many skilled friends of St. Thomas from our earliest days up to today.

For many years, St. Thomas has had gifted Family Ministers on staff. The Rev. Deacon Mary Beth Emerson served for seven years as Family Minister.  Following Mary Beth’s retirement, The Rev. Jaime Leonard joined the staff in September of 2017 and served until she was called to be Rector of two churches in Montana in July of 2018. Our newest Family Minister, Susan Allen began her work with us in September 2018. September 2018 also saw The Rev. Anne Turner join the staff as our quarter-time Associate Rector for Pastoral Care.

The Rev. Fran Gardner-Smith began as Rector at St. Thomas in February of 2018.

As time unfolds, we hold hopeful hearts for the future of St. Thomas and the ministry God has called us to share together.